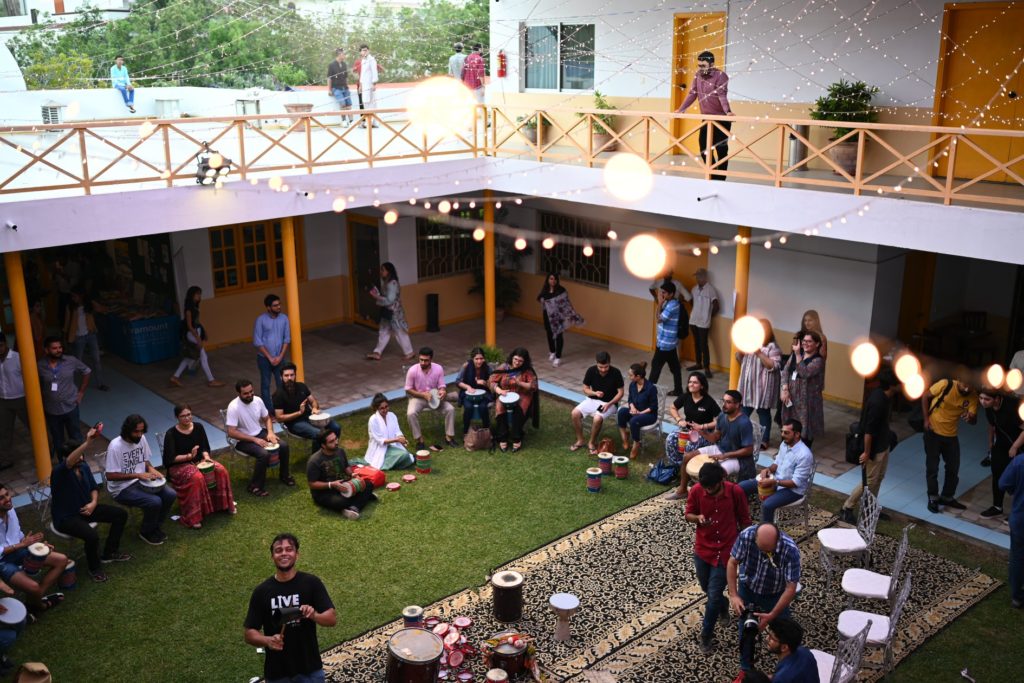 It was a warm day in Karachi, when the fabulous Alliance de Française Cultural Center boomed with the exuberance of the Creative Karachi Festival (CKF), hosted by The Second Floor (T2F). It was the third festival of its kind, and was originally launched by the beloved Sabeen Mahmud, who called it a “non-stop party in the park!”

The festival attempted to bring about a transformative change through creativity, art and dialogue. It offered a chance for interdisciplinary arts and creativity to flourish through the works of painters, craftsman, performing artists, writers, poets, and the like. CKF provided a platform for budding artists to express themselves and showcase their talent, while also preserving and celebrating traditional art forms.

The Music Stage was set for a constant line up of performances by famous bands like Tamasha and Project Zil who set the stage ablaze with their music. Close by, the food stalls served scrumptious shawarmas, fries and drinks, and delicious chai to keep the enthusiasts entertained while they visited the stalls.

The Film Room showed documentaries and films which kept people on the edge of their seats. Laal Kabootar by Kamal Khan, Bas Aik Pyaali Chai by Ali Sohail Jaura/M. & Belaal Imran and Nameless by Noman Khaanzada, were just a few to name amongst a myriad of filmmakers at the festival.

Up the staircase and into the Upper Gallery, dramatic readings, comedy specials and panel talks filled the room with feelings of curiosity, praise and laughter from the audience. Karachi Biennale, Aurat Naak, Maa Dharti, and the Muttahida Comedy Movement were amongst the notable speakers of the day. Meanwhile, the courtyard below showcased beautiful performances and qawwalis. Theatre Plays, Tai Chi Dances, Daastan Goi and Qaawali kept people on their feet, while they witnessed a diverse repertoire of Pakistani talent come to the stage.

What ties all these performances and stalls together is the art of story-telling. To narrate their journeys with enthusiasm and heartfelt conviction was perhaps the most important thing to every artist and performance at CKF. “A lot of thought was put into the purpose of CKF being a platform for budding artists, local talent and craft for the preservation of certain artists or art forms or music,” explained Shumaila Amjad, the Art Liasion Head for CKF.

Thanks to CKF’s management team, everyone was reminded of Sabeen Mahmud’s hope for up-and-coming artists in this country. By giving artists a voice in Sabeen’s memory, CKF touched the hearts of everyone there.

One such artist was Maham, the owner of ‘Tween The Knots’, who got the chance to display her handmade crafts at the festival for the first time. She said, “I am thankful for the festival for giving such a wonderful response to my art and [for being] a great support system. I feel that this a great platform for artists and creative people to showcase their art and give a sense of the talent we have in Pakistan. I am definitely going to come next year as well!” So, be sure to visit CKF next year for more exciting

From the afternoon, well into the night, the Alliance de Française buzzed with excited crowds filling the venue. It was wonderful to see people of all ages, and from different walks of life taking part in celebrating the local art and culture scene. This year’s theme was promoting eco-sustainability, and CKF partnered with GarbageCAN and Tofiq Pasha’s World, to bring home the idea of beauty through nature and environment sustainability.

The arts and crafts exhibitions in the Garden Area were especially mesmerizing, as the artists’ craftwork burst with stories of their skills and artistic journeys. For instance, an exhibition by Shazia Samar Collection showcased beautiful handmade embroidery and handicrafts that came from different parts of the country.