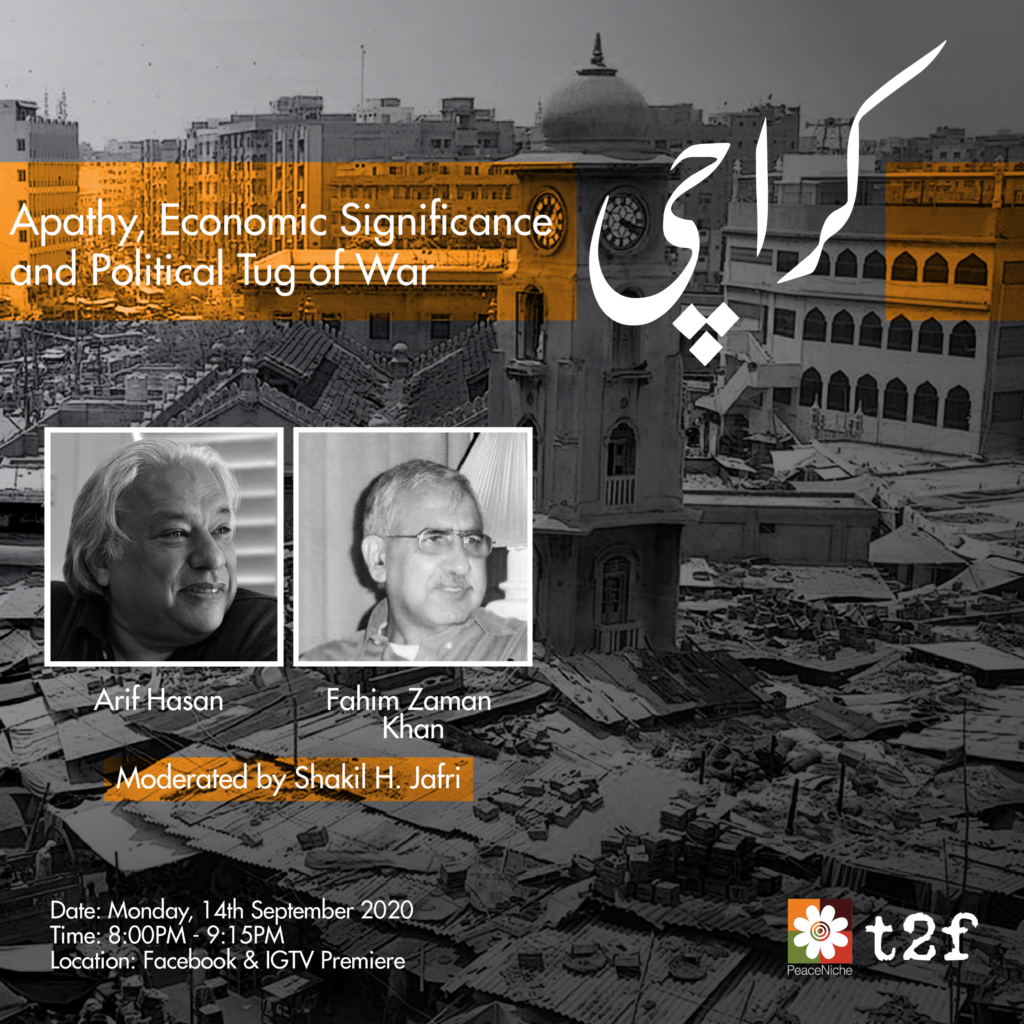 The unique position that Karachi holds as the megapolis in comparison to other cities of Pakistan comes with its own pros and cons for itself, the province and the Country. Karachi faces a complex political environment, ad-hoc planning, poor governance, and weak financial and institutional capacities. Join us for a detailed discussion with Arif Hasan and Fahim Zaman Khan moderated by Shakil H Jafri on the topic of Karachi.
About The speakers:
Arif Hasan:
Arif Hasan is an Architect/Planner in private practice in Karachi. He studied Architecture in the UK and on his return to Karachi in 1968, established an independent practice which slowly evolved into dealing with urban planning and development issues in general and of Asia and Pakistan in particular.
He has received a number of awards for his work (which spans many countries) including the UN Year for the Shelter-less Memorial Award of the Japanese Housing Association (1990), the Netherland based Prince Claus Award (2000), and the Hilal-e-Imtiaz of the Government of Pakistan (2001). Recently, he has been given a Life Time Achievement Award by the Institute of Architects, Pakistan (2003). The Orangi Pilot Project-Research and Training Institute also received the British Housing Foundation’s World Habitat Award in 2002.
Fahim Zaman Khan:
Fahim Zaman Khan is a renowned journalist associated with the Dawn group as their Director. Fahim actively participates in various social and political movements, struggles, and efforts geared towards the restoration of democracy and social justice in the country. He established the first-ever air ambulance service from the platform of Edhi’s Foundation. To date, Fahim has been nominated twice as the Administrator of Karachi Metropolitan Corporation. During his tenure, he conceived, initiated, and completed a large number of development projects for the city.
About the moderator:
Shakil H. Jafri:
Shakil Jafri is a writer, poet, producer, presenter, operations manager and social activist. He has started several cultural and literary organizations. He has delivered lectures and presentations on renowned writers, poets and artists at different seminars, literary circles and festivals in the country. Carrying over 30 years of experience in cultural, art, literature, social event management, he has also co-produced documentary films on social and urban issues.
Date: Monday, 14th September 2020
Time: 8:00PM – 9:15PM
Location: Facebook & IGTV Premiere