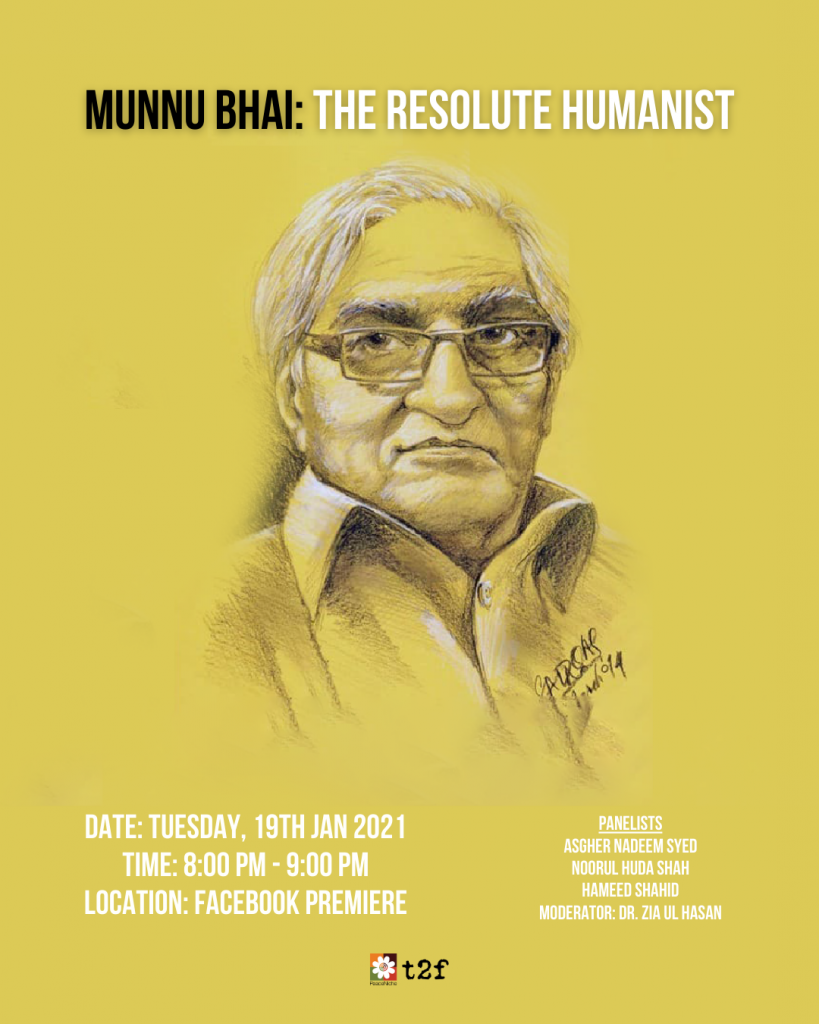 About the event Munnu Bhai

Beyond an admired playwright and great poet Munnu Bhai was a progressive, secular and a firm advocate of humanism, equality and social justice. On 2nd death anniversary of this great man, a discussion on all aspects of his life and his work is arranged by T2F.

Poet, novelist, and a teacher of film and theatre. He has recently published a book titled, Tooti Hui Tanab Udhar. Best known for his popular TV drama serials, such as Chand Grahan, Nijaat, Ghulam Gardish, and Piyaas, Asghar Nadeem Syed has written plays depicting the feudal culture in rural Sindh, exploitation of women, the oligarchic structure in Pakistan comprising politicians, feudals, media moguls and the bureaucracy. He received the President’s Pride of Performance in 2006.

Noorul Huda Shah is a well-known and respected short story writer, playwright, poet, columnist, and broadcaster. She writes both in Urdu and her native language Sindhi. A familiar name in the Pakistani drama industry, she is famous for very popular serials including Jungle, Marvi, Bebak, Meri Adhuri Moahabat, Ajayb Ghar, Adhoora Milan, and Ishq Gumshuda. She was CEO of A-Plus television. Her work reflects the depth of her thoughts on cultural and socioeconomic issues that prevail in the country

An Urdu fiction writer and literary critic from Attock, Punjab. Hameed Shahid has authored several collections of short stories, a novel, and literary criticisms. His book Dehshat mein Mohabbat was nominated for both the 6th UBL Literary Excellence and KLF awards (2016) and was declared a winner at the UBL Literary Excellence Award in 2017. He received Tamgha-e-Imtiaz from the President of Pakistan in 2017.

Associate professor at Urdu department of the University of Punjab, Dr. Zia ul Hasan is a poet, writer and critic. He is also member of Doctorial committee and member of studies at the same department. Dr. Zia is author of 11 books inclusive of two collections of his own poetry.