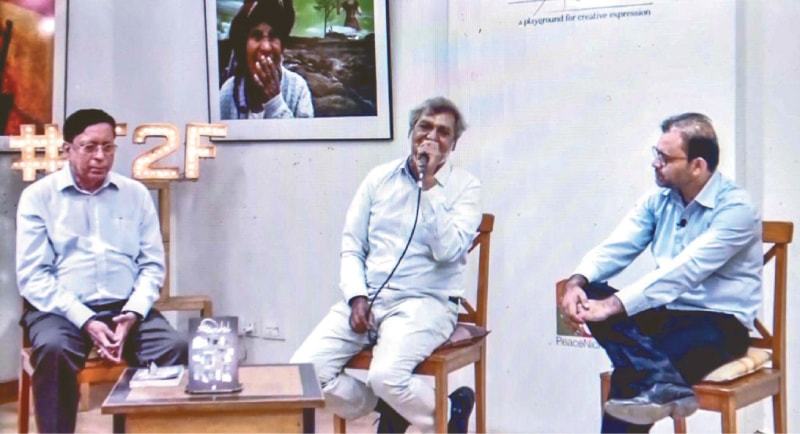 A book of Urdu poetry titled Main Ista’aron Mein Ji Raha Hun by Dr Salman Sarwat was launched at T2F and live-streamed the other day.

Shedding light on the book, eminent poet Firasat Rizvi said he has personally known Dr Sarwat for a long time because he had been friends with his father, the late poet Sarwat Husain, and has been reading his poetry on a regular basis. In literature, however, personal friendships and acquaintances don’t count. In this field, one has to be ruthless to judge a work of art bearing in mind only literary yardsticks.

Mr Rizvi claimed Dr Sarwat’s poetry contains scientific awareness, which means, the way science treats the world of reason: to understand that and to decide whether science should be accepted with its values or not. The author hasn’t created poetry by reading poetry, but by living life. “The more you are close to life the more your poetry comes across as truthful.”

The other aspect of the book that Mr Rizvi touched upon was the quality of free verse in Dr Sarwat’s poems. He claimed the kind of azaad nazm that he’s nowadays writing no one else in Pakistan is. His poems have political consciousness, too. This consciousness is so transparent that one can see Pakistan’s history in it. One of the accusations hurled at Dr Sarwat’s father Sarwat Husain’s poetry was that it didn’t have political consciousness and only talked about beauty. But Dr Sarwat’s poetry has that because he was born and brought up in a politically charged atmosphere. When he was born in 1977, martial law was imposed in the country, followed by events such as Z.A. Bhutto’s hanging, the Iranian revolution, the Soviet invasion of Afghanistan, the creation of the Taliban, Karachi’s violence, 9/11 etc … all these factors have gone into the making of his politically rife poems.

Poet Ajmal Siraj said contemporary sense is evident in Dr Sarwat’s book. Main Ista’araon Mein Ji Raha Hun is the selection of the poems that he’s penned in the last two decades or so. He [Siraj] had the opportunity to read the manuscript before it was published. The marked feature of his poetry is that it matches his personality and lifestyle. The subjects that he has chosen are contemporary, discussing the problems of the era he’s living in. His nazms and ghazals both highlight the same topics.

Mr Siraj said Dr Sarwat will continue to write and there’s a possibility that what he will write in the future will have more material to mull over.

Dr Sarwat said no one comes to poetry just like that. There was an atmosphere of creativity in his household from the beginning. When he entered practical life he realised that he couldn’t express himself the way he formed ideas. So he needed a channel to express himself, and poetry provided him with that channel. This is the reason that he became a teacher because when you’re teaching, in a way, you’re expressing yourself.

Dr Sarwat also recited his poems. One of his couplets: